Spruce Hill Road was the first complete new road to be laid out and developed within the large post-World War II subdivision known as King’s Grant. The 20 original houses were constructed in the mid- to late-1950s by Techbuilt Inc, a Cambridge-based corporation that created the Modern style “Techbuilt” prototype house under the direction of architect Carl Koch. 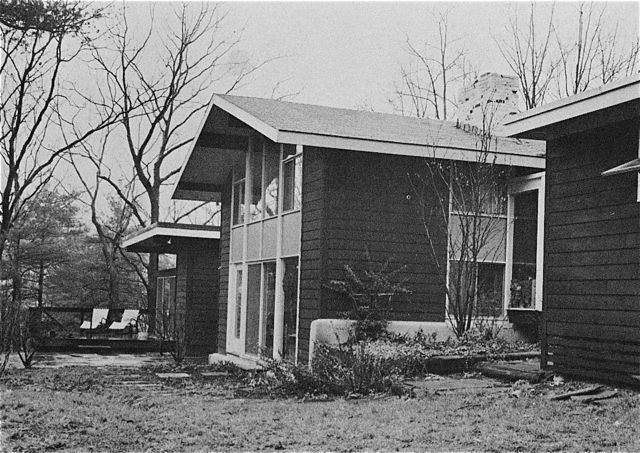 Techbuilt Inc. was a manifestation of a larger movement in the Boston metropolitan area, led by Koch and others, to create affordable communities that were modern not only in architecture but also in spirit (see also Kendal Common Area and Form Form.) Techbuilt Inc. purchased the 250-acre north-side property in 1954 and sold it three years later after developing only a small fraction of the land. Spruce Hill Road was the only new street that had been completed and for this reason is the only “all Techbuilt” street in Weston.

When Techbuilt bought the land in late 1954, the 250 acres of fields and woodland was one of the largest undeveloped parcel of land in Weston. It had been passed from generation to generation of Fiske family farmers until 1912, when it was sold to candy-maker William F. Schrafft. He sold the farm to Charles J.R. Cahill and Joseph H. Beale in 1923, and the two partners established the largest dairy farm in Weston, known as Cedar Hill Dairy. After World War II, the now-defunct dairy was sold to Kendal Green Realty Trust, which kept the farm buildings intact. They rented the barns to Watertown Dairy, which kept cows there until the end of the decade.

Kendal Green Realty Trust held the land until November 1954, when they sold it to Techbuilt. The company laid out 40 lots along North Avenue, the lower end of Cahill Road, (now King’s Grant Road), and Spruce Hill Road. Techbuilt Inc. had a mortgage agreement with Cambridge Savings bank for $80,000, and a requirement that the money be paid back in three years.

Since the company conveyed the land to the Watts Realty Corp exactly three years later, it can be assumed that Techbuilt was unable to pay off the mortgage without selling the property. Reasons cited by local residents for the failure of the development include high costs of infrastructure, particularly roads and water supply. Because Techbuilt sold the land before any more streets could be developed, Spruce Hill Road is the only street in Weston where all the houses-at least until recent tear downs-were Techbuilts.

Watts Realty Corp owned the property for only two months before conveying it to Weston Land Company, a group of local investors. Over the next decades, the new owners gradually subdivided the property into more than 100 lots on King’s Grant, Myles Standish, Bradford, Indian Hill, Hancock, and Bay State roads. Buyers purchased the land and hired their own architects or builders.

It is interesting to note that many subsequent buyers of land in the King’s Grant neighborhood selected contemporary designs. Techbuilt continued to build modular houses in Weston, but prospective buyers had to find their own land.

In the mid-1950s, Weston was growing rapidly. The town was at the intersection of two new major highways (Route 128 and the Mass Turnpike). Early owners of the Techbuilt houses on Spruce Hill Road settled there for two principal reasons:

Buyers were generally young. They recall that contemporary design didn’t usually attract older people used to traditional styles, and that many younger buyers also preferred traditional houses and wondered when the Spruce Hill residents were going to buy a “real house.”

Nancy Baer, an original resident, summed up the attraction of Techbuilt: “We liked the price, the size, the 'purity,' the idea of honest materials, and the contemporary feel. We were young…” Lorraine Balkin, another of the original builders, observed, “We thought it was great- the house had all this glass… and the woods…”

Science, technology and education were heavily represented in the professions of original owners. Among the men, there were three professors, three attorneys, and one each of the following occupations: news director, “electronic,” manager consultant, advertising, physician, engineer, instrument worker, industrial designer, sales manager, insurance, and construction superintendent. Of the women, two were social workers, one woman is listed on poll-tax records as a “housewife writer,” and the rest were listed as housewives.

The Balkin family owned the Newbury Street store Decor International. As the children grew, the women branched out into teaching, creative arts and volunteerism, particularly in community service and social issues. Lorraine Balkin described the neighborhood as “a congenial, creative, imaginative group of people, everyone with little children. It was a real neighborhood, where everyone knew everyone. It was a warm, close-knit community with a lot of unusual people.”

Resistance to the Development

In the 1950s there was resistance in Weston to development in general and the Techbuilt development in particular. In 1954, the town adopted new zoning requiring 60,000 square foot lots on much of the remaining undeveloped land, and Spruce Hill Road lots had to meet the larger lot size requirements. The Techbuilt development was out of character with the way Weston had grown up to that point. People didn’t like the fact that all the houses looked basically the same.

In addition to the unfamiliar style, the Techbuilts were perceived as poorly constructed, of inferior materials. People called them “chicken coops.” When Weston assessors created categories of construction as part of building records, the Techbuilts were low on the list of desirable house types. It is difficult to know how much of Techbuilt’s problems in Weston and ultimate sale of the remainder of the 250-acre parcel was related to sales or infrastructure issues and how much to town opposition. It is notable that architect Carl Koch was behind the successful development of Conantum in Concord, a community of 100 houses on approximately 190 acres that was begun in 1951 but was unsuccessful with the Techbuilt, Inc. project in Weston, which would have been of similar size.

Reputation of the Area

The Spruce Hill Road Area developed a reputation as a liberal Democratic stronghold in a conservative Republican town. At some point the street acquired the nickname “Pink Hill.” According to James Fay, one of the residents, attorney Larry Locke, ran for school committee, which at that time was always a hotly-contested position. Someone raised questions about whether he had ever been associated with the Communist Party and he withdrew from the contest, which was “getting a little vicious,” according to Fay. This was not long after the McCarthy era.

Residents in the Spruce Hill neighborhood established a fair housing association to help make it possible for minorities to buy in Weston. They also supported fair housing legislation at the state level. Almost everyone on Spruce Hill Road joined the association, which also had support from elsewhere in the town. At that time, there were few if any families of color in Weston. It was generally known that Jews were not welcome. Realtors were not required to show houses to everyone. The fair housing association tried to get people to sign up and say they would welcome people of all races in Weston.

Two Spruce Hill women, Nancy Baer and Imogene Fish, along with South Avenue resident Harriet Elliston, started the Roxbury-Weston program in the mid-1960s, after the assassination of Dr. Martin Luther King. Children from Roxbury joined Weston children for a summer day camp experience. Several years later, another Spruce Hill resident Gay Fay was instrumental in establishing the Roxbury-Weston nursery school. Mrs. Fay also taught part-time in the Roxbury schools. Deborah Ecker was head of the League of Women Voters, and many neighborhood women were active in the League.