Wellington Farm Historic District (also known as Gateways Farm) was placed on the National Register of Historic Places on April 14, 1988, and includes the following properties:


Summary of Description
The Wellington Farm is an irregular parcel of 35 acres located in southern Weston. Bisected by Wellesley Street, it includes a main house (ca 1760, with remodeling ca. 1800 and ca. 1900) with fields on the east side of the street, as well as a farmhouse (ca. 1917), a large barn complex (ca. 18th to 20th centuries), pigsties (early 20th century), a greenhouse (modern), and additional fields to the west. 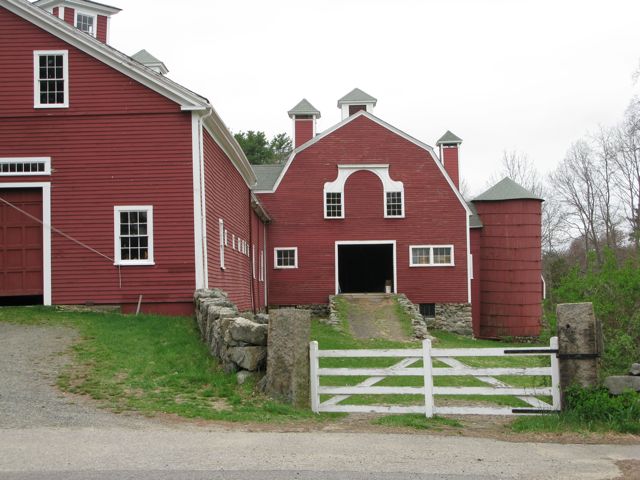 Landscape Features
Stone walls, visible on historic maps, continue to subdivide the fields and to define the farmstead along Wellesley Street.

Period Representation
Like most farmsteads, the Wellington Farm does not represent a single historic period. Rather, it has evolved over time, and now represents Weston’s 18th and 19th century agrarian period, as well as its turn-of-the-century vogue as a summer retreat for wealthy Bostonians. It has remained largely untouched by recent suburban development, despite its proximity to the Massachusetts Turnpike (directly north), and is significant as one of only a few working farms remaining in the community.

Present Day Use
At present, three fields on each side of Wellesley Street are rotated to produce hay for the horses that are boarded at the farm, and innovative hydroponic gardening takes place in a modern greenhouse.
Evolution of the Main House
The main house, located on the east side of Wellesley Street, is the oldest structure on the property. It has evolved through numerous enlargements and remodeling reflective of its continuous agrarian/residential history, to reach its current configuration.

Original Construction
Research indicates that the original portion of the house was constructed in the mid-18th century, ca. 1760. Preliminary physical investigation reveals that this was probably a typical 2 1/2 story, gable-roofed, five-bay, center entry, center-chimney dwelling that may have faced south. Extant clues to its 18th-century construction date include the presence of a large fireplace with a bake over in the present north (front) room, and the remnants of riven lath (generally phased out by the time of the Revolution) in the cellar way. 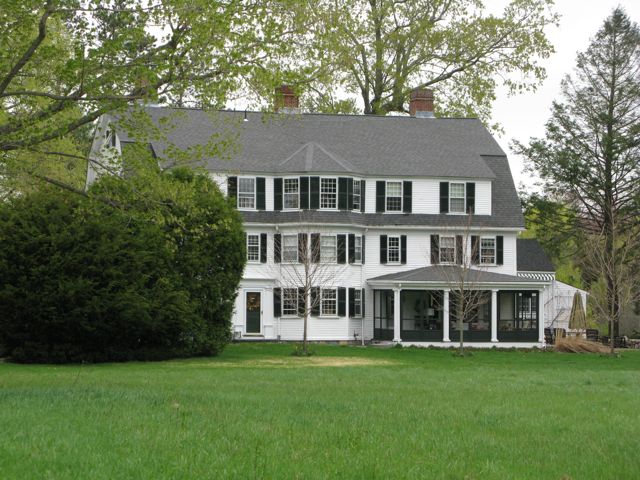 Updates
Physical investigation also indicates that the house was substantially enlarged and updated in the early 19th century, ca. 1800-1820 At that time it appears that the original house may have been turned ninety degrees to face west onto Wellesley Street, and that a south-facing, 2 1/2 story, five-bay, center-hall house with twin interior chimneys was added to the rear with a stair hall separating it from the old house. The abundance of Federal-period interior finish work throughout the house adds further testimony to its substantial enlargement and rebuilding in the early-19th century.

Additions
By 1899, when a plan was drawn of the farm and its buildings, other changes to the main house had occurred. A wing, projecting westward toward Wellesley Street from the northwest corner of the old house, had been added, as well as a bay window at the east end of the south facade of the 19th century house and a bowed verandah uniting the entire southern elevation The wing may have been added during the early 19th century remodeling, but the bay window and veranda are characteristic of late 19th century architecture, and could not have occurred until after the Civil War.

Major Transformation
At the turn of the century, about 1899 - 1910, the houses underwent another major transformation. The front wing was removed and replaced by another one extending northward on the axis of the old house. Parts of the earlier wing may have been used here and parts of it may have been used to create the kitchen ell now extending west off the northwest corner of the 19th century house. In addition, the roof was removed from the entire structure, the chimneys were built up, and a third story with a gambrel roof was added over all.

Final Major Change
A final major change occurred in the mid-20th century when the servants’ quarters in the upper stories of the northwest wing were removed, and the wing was cut down to one-story gable-roofed height.
Other Buildings on the Farm
Barn Complex
The Barn Complex, painted red, includes both gable-and gambreled-roof sections with distinctive cupolas, as well as a silo, which is one of the most prominent and picturesque features of the farm. The barn complex is composed of three sections, one behind the other, and angling slightly off to the north.

Structure
The entire structure is clapboarded-clad, trimmed with corner boards and fascia, and sits on a fieldstone foundation. The front part is gable-roofed and faces a gable end, with double door and transom, to the street. This form is typical of the mid-19th century, a date further reflected in its interior paneled doors. Visible framing members reveal empty joist pockets and mortises, pointing to reuse and an earlier (possibly 18th century) construction date. Directly behind the front gable-roof section is a gambrel-roof section with its own double entry approached by a granite-sided uphill slope. Fenestration of all three sections is irregular, but generally consists of either 6/6 double hung sash or fixed six-pane lights. 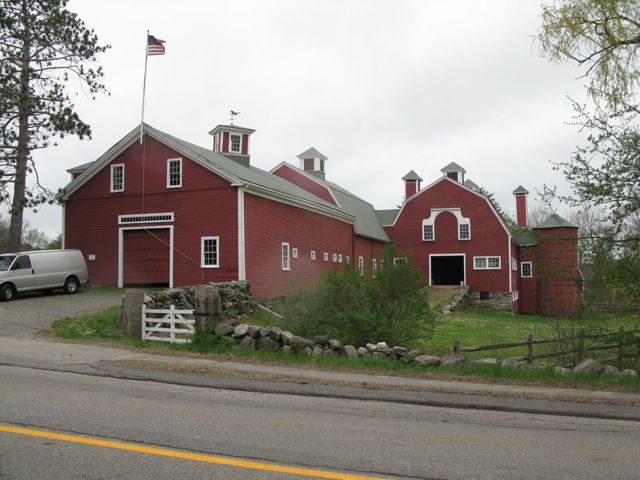 Farmer's Cottage
The Farmer’s Cottage was constructed in 1917 to the designs of noted Colonial Revival architect Joseph Everett Chandler. Physical investigation and oral history indicate that is was assembled from existing outbuildings on the farm. While the front portion may have been newly constructed in 19917, the portions extending behind it were probably a smokehouse and a carriage house. Both show evidence of used framing members, including shouldered posts. 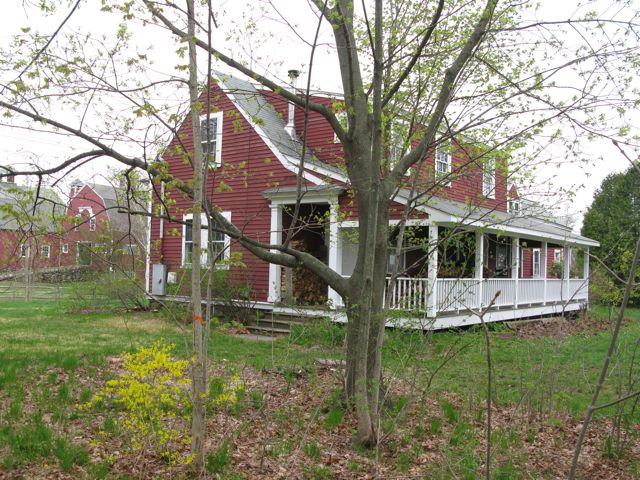