Queen Anne Style
The earliest houses are Queen Anne in style and are generally simple, gable-front structures with one-story porches across the front. The most detailed examples are the Roland Rand House at 227 Merriam Street (1892, MHC #226, Map #37; barn: MHC #227) and 181 Merriam Street (ca.1902, MHC #600, Map #30, Photo #8). Both of these houses have been enlarged and remodeled. They have typical Queen Anne porch posts and patterned shingles in the gable, although some of these details may date from recent renovations. 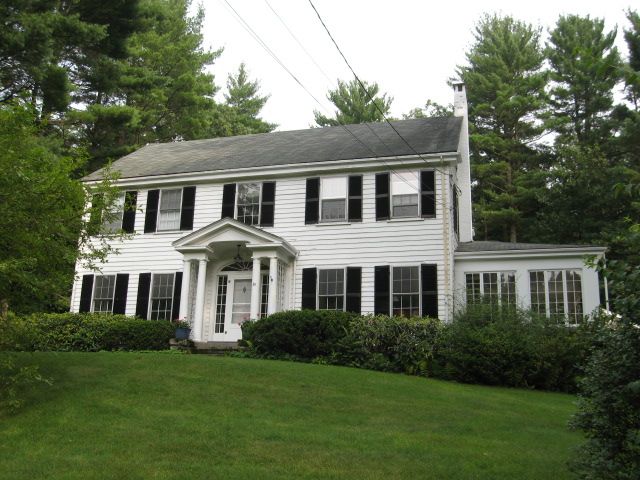 Large Houses
Three adjacent houses on the east side of Merriam Street, built for three family members in 1901, were larger and more elaborate than their earlier counterparts and form a notable ensemble. These three houses are the:
Washburn House
One of the first and most important of the houses in the 1905 Weston Land Association subdivision was the shingled “Four Square” house built for Winslow and Alice Washburn at 198 Merriam Street (1905, MHC #598, Map #27, Photo #4). Because it was built by one of the principals involved in the development and stands at the Westland Road entrance into the subdivision, the Washburn House was probably intended to demonstrate the size and type of house that investors hoped would be built in the new neighborhood. The Washburn house was designed by Waltham architect George Strout and constructed by H.D. Beardsley, also of Waltham. Because the house is still occupied by the son of the original owners, it is remarkably intact. The shingles retain their original dark brown stain and yellow trim color. The brown stain, commonly used on late 19th and early 20th century shingled houses in Weston, is now relatively rare. Interiors at 198 Merriam Street have also remained unchanged.
Houses Built Similarly
Four years later, almost the exact same house-also designed by George Strout- was built for Washburn’s brother-in-law and sister, Edmund and Cora McKenney, at 40 Silver Hill Road on the corner of Westland Road (1909, MHC #594, Map #20, Photo #1). The Washburn house also bears a distinct stylistic similarity to the 11/2 story Frank & Margaret Whelpley House at 4 Silver Hill Road (1912, MHC #591, Map #14), also designed by Strout or inspired by his earlier works. 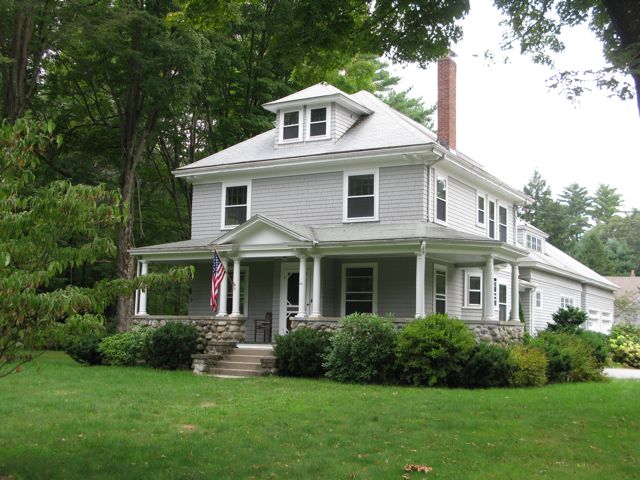 George Strout
Architect George Strout, who practiced in Waltham in the late 19th and early 20th century, was not well-known in the Greater Boston area but is credited with a number of notable buildings on the north side of Weston. He designed two houses for the Thurston family, both within the Kendal Green Historic District.

Thurston Cottage
The Thurston Cottage at 153 North Avenue (1902) is a fine Shingle Style example notable for design, siting and quality of the fieldstone foundation and retaining walls-a quality seen also in the Silver Hill examples.

Thurston Bungalow
The Thurston Bungalow at 147 North Avenue (1904) is an unusual rustic log bungalow with Craftsman influences. Strout also designed the 1900 Colonial Revival-style Methodist Church, which is no longer extant. In Cambridge, he designed duplexes at 119, 121, 127 and 133 Appleton Street and 258 and 264 Huron Avenue, all dating to about 1917.

44 Silver Hill Road
Another of the important early houses in the Silver Hill neighborhood is 44 Silver Hill Road (1906, MHC #595, Map #21, Photo #1), a prominently located corner house built within the first year of the new subdivision by one of the trustees, Charles Peakes. The house is notable for details like the wide overhanging eaves with show rafters, pent eve, and sunburst pattern in the gable. 44 Silver Hill Road is the only house in the district that was not constructed as a single family unit. By developing a two-family rental property with apartments on each floor, Peakes could afford to build a substantial house to anchor an important corner in the heart of the neighborhood.

Notable Dates
Most of the houses within the Silver Hill Historic District were constructed before World War II, but development has continued through the present day. Nine houses date after 1954. Some of the post-World War II house designs, particularly the ca. 1955 ranch house at 5 Silver Hill Road (Map #13), do not take neighborhood characteristics into account. More recent examples of infill construction have been more successful.

1990s & Later
In the late 1990s, as the price of land increased, owners of two double lots sold off their extra lot, and compatible new Shingle Style houses were added at 22 and 43 Silver Hill Roads (Map #16 and #6). In 2001, a small 1890s house at 213 Merriam Street (Map #34) with little remaining architectural detailing was replaced with a larger house in a late19th century Queen Anne farmhouse mode. In 2002, a NeoVictorian house was built on an undeveloped lot at 226 Merriam Street (Map #52). The successful preservation of a house at 14 Silver Hill Road (1907, MHC #592, Map #15) in 2003 is an indication that the historic character of the neighborhood is recognized and valued. Because real estate prices in Weston are high and many houses within the district are not as large or up-to-date as new buyers would like, expansions will continue and tear downs will remain a threat. The Weston Historical Commission has worked to increase architectural awareness and encourage preservation efforts.

Westland Road
The sense of cohesiveness and overall integrity is not present in the portions of Westland Road outside the Silver Hill Historic District. Westland Road developed more slowly than Silver Hill Road and many of the lots were developed with modest frame cottages with little architectural interest. Over the past two decades, these have been replaced with new houses, many of which are considerably larger in square footage than any of the pre-World War II examples. Because of major inconsistencies of size, scale, style and age of houses, most of Westland Road has not been included within the district boundaries.
Government Websites by CivicPlus®
[]