The following is an excerpt provided by the Historical Commission. More details on the Boston Post Road Historic District and other historical areas in Weston can be found on the Commission's web page.

The Heart of Weston

The intersection of Boston Post Road, Church Street, and School Street has been the religious and governmental heart of Weston for more than three centuries. In the days when Cutting’s store stood on what is now the Town Green, it was the commercial heart, as well. Today, we can read the Town’s history in the architectural landmarks that remain here in this one compact district. In the handful of buildings that frame our Town Green, we see the architectural manifestation of Weston’s increasing prominence and prosperity over three centuries.

In the 18th century, when Weston was one of the first stagecoach stops on the Boston Post Road going west, Josiah Smith operated a popular tavern. In singling out what he calls the Town Green District in his 2010 book "Metropolitan Boston," architectural historian Keith Morgan writes, "The principal document of colonial commerce on the Town Green is the clapboard gambrel-roofed Josiah Smith Tavern."

In the late 19th century, the Town’s transformation from a rural farm town to the Lenox of the East is symbolized by two new buildings in the Town Square, the fieldstone First Parish Church (1888) and the red brick Weston Public Library (1899). In these two buildings, the inspiration came from England, in the form of English Revival, a style used in academic and other learned settings. These two buildings were a source of great pride and represented an increased cultural sophistication. 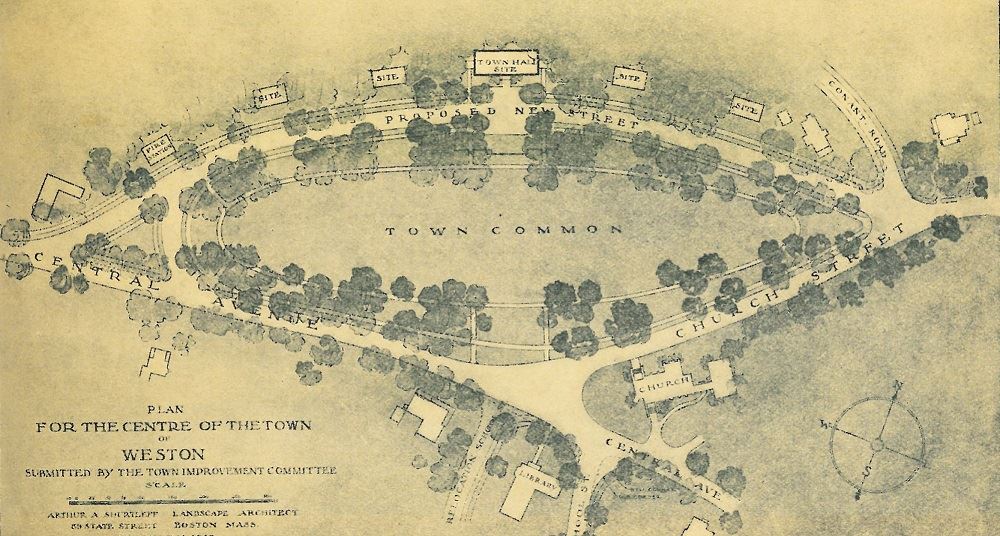 The next step in the evolution of the Town Square was the actual redesign of the Town Center and the creation of the Town Green in the 1910s. This time, the goal was nothing less than to create a village common, or green, always found in the best types of old New England villages.

The inspiration for the Green was not England but rather American Colonial Revival. The landscape architect, Arthur Shurtleff (later Shurcliff), wrote in the 1912 Town Report: "In my opinion, the execution of this scheme would give Weston a Town Common of remarkable individuality and in many respects the finest open space of its kind in the Commonwealth."

Further details on the history of Weston's Town Common was researched by local landscape artist Nancy M. Fleming and published in 1991 by the Weston Garden Club for its 50th anniversary. It has been recreated for online reading: History of the Weston Town Common (PDF).

The continued revitalization of the Heart of Weston also included the construction of a new fire station (1913) and a monumental Town Hall (1917), both designed in the Georgian/Colonial Revival style, as appropriate to the new colonial-style town common. The fire station was designed by Alexander S. Jenney, who had designed the nearby library 15 years earlier. In 1919, the Gothic Revival St. Julia Church took its place facing the Town Green. Weston gained regional and even national attention for its new civic center.

Surrounding this early 20th century Town Green is an ensemble of important buildings representing each of these phases in the Town’s growth and development. Each is more ambitious than the example from the previous century, as Weston attracted more and more well-to-do residents. But the common thread is the pride of the citizenry in their Town Center and the institutions—the church, library, and Town Hall, standing along with the colonial tavern.

Since the creation of the Town Green a century ago, Town leaders have carefully protected this centerpiece of the Town. Lamson Park was taken by eminent domain in order to protect the visual integrity of the Green and Town Hall. The new playground was carefully planned to be tucked in and to coordinate with the natural surroundings and topography. An addition to the Town Hall was carefully designed to preserve the character of the building. The exterior of the Josiah Smith Tavern was meticulously restored in 2006 with Community Preservation Act funds and the future restoration of the interior will very much protect and preserve the historic architecture. First Parish Church has carefully guarded the integrity of its handsome stone building, which has several additions in compatible styles.

Constraints on the library site meant that the 1899 building was never expanded; however, it has been carefully restored and rehabilitated to maintain its architectural integrity. The building will house the future in library technologies and services with the creation of the Weston Art & Innovation Center.

As a result of this dedicated guardianship, the Town Green area looks much like it did a century ago when Town leaders completed their visionary Town Improvement Plan.